A quarry is a place where stone is mined for construction purposes. For instance, in the United States, South Carolina, North Carolina and Georgia are known for their high quality granite quarries. Many other places have high quality stone as well. A fine home may have a granite counter top from Brazil or travertine floors from Italy or Turkey. Stone is quarried for construction purposes all over the world.

Most residents of Anderson, South Carolina are not aware of it, but downtown, there is a different kind of quarry under one of the office buildings. The Living Church of God meets in a basement hall there every Sabbath, and the members of that congregation call their hall, “The Quarry.”

What do the members mean when they call their meeting hall “The Quarry”? To understand, let us consider some of the history of God’s quarry work, and see what it means for us as we progress on our Christian journey. 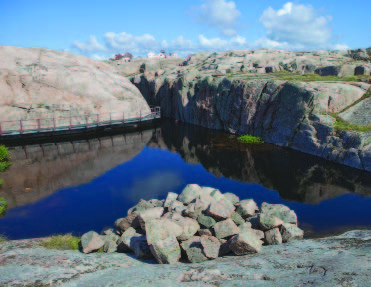 The first Temple—the one Solomon built—was very unusual in how it was constructed. “Then King Solomon raised up a labor force out of all Israel; and the labor force was thirty thousand men. And he sent them to Lebanon, ten thousand a month in shifts: they were one month in Lebanon and two months at home; Adoniram was in charge of the labor force. Solomon had seventy thousand who carried burdens, and eighty thousand who quarried stone in the mountains, besides three thousand three hundred from the chiefs of Solomon’s deputies, who supervised the people who labored in the work. And the king commanded them to quarry large stones, costly stones, and hewn stones, to lay the foundation of the temple. So Solomon’s builders, Hiram’s builders, and the Gebalites quarried them; and they prepared timber and stones to build the temple… And the temple, when it was being built, was built with stone finished at the quarry, so that no hammer or chisel or any iron tool was heard in the temple while it was being built” (1 Kings 5:13–18; 6:7).

When you visit a normal construction job, to build a house for instance, there is plenty of noise. Hammers are slapping on boards, and there is a general cacophony of sounds coming from the activities of the workmen. In ancient times, it was no different. Stonemasons had to cut the building blocks to fit, and in Solomon’s day—the early Iron Age—skilled workmen used iron hammers and chisels to cut and shape the building material—much of which was stone. Stone would be rough-cut at the quarry and then trimmed and finished on the site. The Bible records that there were tens of thousands of workmen involved, but the construction management was different from the standard practice of their day. The stone was not only cut out at the quarry, but it was finished there as well. This would have required that the workmen finishing the large stone blocks have precise measurements to work from. Then the finished stone could be transported to the temple site and put into place without further work by hammer, chisel or other tool. The construction site for Solomon’s temple was a quiet site compared to most projects in his day and ours.

The glorious temple that Solomon built was destroyed by the Babylonians around 586bc. “And all the articles from the house of God, great and small, the treasures of the house of the Lord, and the treasures of the king and of his leaders, all these he took to Babylon. Then they burned the house of God, broke down the wall of Jerusalem, burned all its palaces with fire, and destroyed all its precious possessions” (2 Chronicles 36:18–19).

When Judah returned to Jerusalem in the time of Ezra and Nehemiah, they built a second temple that was far from as glorious as the first one. “But many of the priests and Levites and heads of the fathers’ houses, old men who had seen the first temple, wept with a loud voice when the foundation of this temple was laid before their eyes. Yet many shouted aloud for joy” (Ezra 3:12). The second temple was greatly expanded by Herod in Jesus’ day but was destroyed by the Romans in 70ad. The western retaining wall of the temple mount still exists in the form of huge stones put there by Herod the Great, and the “Wailing Wall,” as it is often called, is a very special location for the Jews.

Some have asked whether there will be a third temple built in the Temple Mount before Christ comes. The Bible gives indications that it will be—although it does not have to be built for the sacrifices to begin. In Ezra’s day, the sacrifices were resumed as soon as the priesthood was sanctified—which occurred before the foundation of the second temple was laid. “From the first day of the seventh month they began to offer burnt offerings to the Lord, although the foundation of the temple of the Lord had not been laid” (Ezra 3:6).

But it took years to build the first and second temples. Is it possible that the third temple could exist in parts already? Some think that it does and could be assembled very quickly from already completed components. Organizations such as the “Temple Mount Faithful” have cut large cornerstones and have prepared bowls, robes and other items necessary for the service of the temple to begin. They have even attempted to take a cornerstone to the Temple Mount. In order to begin the sacrifices, it would be necessary for the priesthood to be reestablished and sanctified. The process of sanctification is described in Numbers 19. But whether the entire Third Temple already exists in parts across Israel is unknown to the world.

The Temple of God Exists Now!

“Now, therefore, you are no longer strangers and foreigners, but fellow citizens with the saints and members of the household of God, having been built on the foundation of the apostles and prophets, Jesus Christ Himself being the chief cornerstone, in whom the whole building, being fitted together, grows into a holy temple in the Lord, in whom you also are being built together for a dwelling place of God in the Spirit” (Ephesians 2:19–22).

“Coming to Him as to a living stone, rejected indeed by men, but chosen by God and precious, you also, as living stones, are being built up a spiritual house, a holy priesthood, to offer up spiritual sacrifices acceptable to God through Jesus Christ. Therefore it is also contained in the Scripture, ‘Behold, I lay in Zion a chief cornerstone, elect, precious, and he who believes on Him will by no means be put to shame.’ Therefore, to you who believe, He is precious; but to those who are disobedient, ‘The stone which the builders rejected has become the chief cornerstone’ and ‘A stone of stumbling and a rock of offense.’ They stumble, being disobedient to the word, to which they also were appointed. But you are a chosen generation, a royal priesthood, a holy nation, His own special people, that you may proclaim the praises of Him who called you out of darkness into His marvelous light; who once were not a people but are now the people of God, who had not obtained mercy but now have obtained mercy” (1 Peter 2:4–10).

God has His building plans. Christ is the Chief Cornerstone, and the apostles and prophets are the foundation. And God’s children are “living stones,” each having a place in the structure, “fitted together.” But we must take care as to what kind of stones we are.

The Apostle Paul cautioned the Church in Corinth. “For we are God’s fellow workers; you are God’s field, you are God’s building. According to the grace of God which was given to me, as a wise master builder I have laid the foundation, and another builds on it. But let each one take heed how he builds on it. For no other foundation can anyone lay than that which is laid, which is Jesus Christ. Now if anyone builds on this foundation with gold, silver, precious stones, wood, hay, straw, each one’s work will become clear; for the Day will declare it, because it will be revealed by fire; and the fire will test each one’s work, of what sort it is. If anyone’s work which he has built on it endures, he will receive a reward. If anyone’s work is burned, he will suffer loss; but he himself will be saved, yet so as through fire” (1 Corinthians 3:9–15).

What will your place be? Those of the Philadelphia era of the Church are described as having a very specific function. “He who overcomes, I will make him a pillar in the temple of My God” (Revelation 3:12).

We are all being shaped and polished for our place in that ultimate temple as living stones—away from the final site in Jerusalem. What about us is being shaped? Every trial we have, every difficult choice, every act of love or mercy matters to us and to God. That is because what we do changes us. The choices we make change us and affect our character. We need to have the will and character of our Father and Jesus Christ.

Your will is your power to choose. When a child is told to do something he does not want to do—say clean up his room—he must obey and in doing so, subordinates his will to his parent’s will. The child’s preferred choice was to continue playing, but the parents’ choice was for him to clean up his room. But when that same child is told to do something he actually wants to do—say have a bowl of ice cream—he complies of his own will. When that child grows up, being trained properly, he will desire and choose to have a clean, neat home. Similarly, when you have to obey God, you subordinate your will to His. But if we allow God to convert our wills, then we begin to choose as He does. Our wills are becoming like His. God is building his holy, righteous character in each of us. Every time we exercise our wills as He would have us to—obeying His law of love—we are being changed and His Holy Spirit works in us daily to transform us. Even our trials can benefit us. “And we know that all things work together for good to those who love God, to those who are the called according to His purpose” (Romans 8:28).

Think of a master builder working on a block of stone with his chisel and hammer. Chip, chip, chip on one side—and polishing on the other. Sometimes the process may be uncomfortable for a “living stone,” but the process is productive!

Where Is the Temple Today?

In “quarries” all over the world! These living stones are being finished and ready for final transportation and assembly in Jerusalem. The temple of God exists wherever God has called out His people.

The stones of the first temple were shaped in quarries all around Judea, but the living stones for the ultimate temple of God are being shaped all around the world. Christ will come and gather His elect—His resurrected and immortal brethren from all the places He has been working with them—from the utmost parts of the earth.