Four hundred and forty-two enthusiastic campers and staff attended the Living Youth Camp in Delaware, Ohio during the first two weeks of August 2016. This summer, attendance was up for the sixth consecutive year! While those of us serving the young people at camp were encouraged by this trend, we were also aware that we had a big responsibility to provide a quality camp experience for each individual involved. So, once again, many people went to work making camp all that it could be!

Just one week prior to camp, long time minister and former Activity Director at LYC Ohio, Engelo Monson, husband of Shirley Monson, died peacefully in his home. He was 76 years old. Mr. Monson had a long history of working with the youth and had served as the youth director of the Regina, Saskatchewan Y.O.U. (Youth Opportunities United) program in the 1970s and early 80s. He’d been a member of the Church of God since 1970, was ordained an elder at the Feast of Tabernacles in 1978 and was the father of five children. On the Monday prior to the start of camp, a memorial service, attended by over 350 people, was held in his honor at the Lodge on campus. Among those present were many who worked with him and got to know him at summer camp. He is missed.

An all-camp orientation meeting was held Monday evening to kick things off, and camp was in full swing by Tuesday morning, with clear skies and a full day of camp activities ahead.

We were privileged to have several special guests attend the Teen Camp again this year. Mr. and Mrs. Richard Ames spent four days with us during the initial week of camp. Mr. Ames spoke to the entire camp during a Christian Living Class on Thursday and gave the sermon on the Sabbath. Dr. Roderick C. Meredith was present during the last several days of camp, as well. Upon his arrival, he addressed the entire camp at the Evening Reflection on Wednesday night, presented a Christian Living Class and gave the sermon on the final Sabbath.

In addition to having these headquarters ministers as guests, we were honored to have the Montgomery family, from Australia, with us for the entire length of camp. Mr. Martin Montgomery served as one of the instructors for the Speech and Communication class, his wife Vicki worked in the kitchen, his son Gus served as an Assistant Counselor, and his daughter Ellie worked in the Media department. It was good to have them there, and they were an encouragement and an inspiration to all.

Mr. Lawdi Ferreira, the Camp Director of our summer camp in South Africa, spent nine days working with us, getting to know everyone and gathering ideas and information that could be used at their camp, which is located on the other side of the planet. Both Mr. Montgomery and Mr. Ferreira conducted Christian Living Classes, addressing all the campers and staff. The theme for camp this year was “Those who turn many to righteousness shall shine like the stars forever and ever”—taken from Daniel 12:3. All of the Christian Living Class topics revolved around this theme, as well as around James 5:19–20, which states, “Brethren, if anyone among you wanders from the truth, and someone turns him back, let him know that he who turns a sinner from the error of his way will save a soul from death and cover a multitude of sins.” 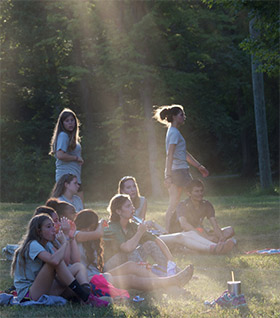 Once again, we were blessed with good weather. Even though temperatures climbed into the mid-90s on a number of occasions, God did hold off the rain, and no activities had to be canceled due to rain. The only rain, lightning, or thunder we did have came during lunchtime, dinnertime, or at night, which just served to cool things off. It is amazing, but we’ve had great weather every year at this site. A number of times heavy rain was experienced less than a mile south or north of camp—sometimes raining south and north of us at the same time—and yet our location remained dry. One of the vulnerabilities of this camp location is that it is not “weatherproof,” and rainy weather would force us to cancel many of our activities. We are thankful that God has looked after us and has consistently given us great weather year after year. Heavy rains did come on Sunday after camp, which made taking down camp challenging, but doable. This made us all the more thankful for the good weather we experienced during camp!

A Full Slate of Fun Activities

This summer was the first time we had a Country & Western Dance, which was a big hit! People wearing boots, jeans, western-style shirts and hats filled the Lodge and spilled out onto the deck and grass outside. Tasty treats and cold drinks provided by the “special projects staff” were enjoyed by all. The hall, both inside and out, was decorated with hay bales, leather saddles, a horse-drawn buggy, a campfire, and other western paraphernalia. Considerable time was spent selecting a variety of appropriate country music songs for this event, resulting in a very busy dance floor the entire evening. We’ll certainly be repeating the Country & Western dance once we relocate to Texas next year!

Another new and exciting activity was added to the schedule this year. Because camp coincided with the Summer Olympics, we decided to dedicate one of the evening activity sessions to having our own “LYC Olympics.” Camper dorms were divided into groups and participated in four camp “Olympic” events: a speed cornhole game, which is much like horseshoes played with small bean bags; a three-person water-balloon launch, in which groups launched balloons in a giant sling-shot and attempted to hit a target located 125 feet away; a group trivia game; and a multi-station relay race. Events were timed, scores were kept and winners announced. An incredible amount of excitement and energy was experienced during this first-of-its-kind event here at camp.

As usual, a talent show was held on the last Thursday evening of camp. If you have not seen one of these shows before, in person or through our online videos, we encourage you to do so. There is an amazing amount of musical talent in the Church of God and a great deal of it among the youth. More than two dozen selections were performed before a crowd of approximately 350 people. This proved to be a special production once again.

The 2016 Final Dinner and Dance was amazing! At this formal event, prime rib (with horseradish), baked potatoes, vegetables, salad and dessert were served for dinner. Following dinner, everyone headed down to the Lodge for the dance. Strings of “twinkle” lights, balloons and creative decorations, complete with a special light that created a “starry” ceiling inside the Lodge, made for a fantastic setting. Appetizers and treats, along with a variety of cold drinks were enjoyed throughout the dance. During breaks, many awards were announced for dorms and individual campers, and an end-of-camp video was shown.

It’s noteworthy that even though we had several special occasions throughout camp and were able to enjoy great food and drinks at all of these events, we were still able to keep the food costs reasonable. Our food cost, once again, averaged just under $6.50 per person per day.

The Ohio Teen Camp 2016 was memorable and profitable. We had many first-timers, and look forward to having more new people added to camper and staff lists again in the summer of 2017 at our new facility in Texas. All of the staff does their best to make it a positive and rewarding experience that you will not forget. We encourage you to sign up!