As women, do any of us feel left out because we don’t have the same authority as men in the Church? God doesn’t discount women in His word or in His plan.

Recently, I was reading in Acts 2:16–18 where Peter was explaining to the “devout Jews” from every nation what was occurring in Jerusalem, with the disciples speaking in tongues on that day of Pentecost, and he quoted the prophet Joel:

Strong’s Exhaustive Concordance shows that the Greek word translated “prophesy” here means to speak or sing by inspiration, in prediction or simple discourse. The “simple discourse” refers to communication of thought by words—that is, “talking.” It would not necessarily refer to preaching to the church, which is a role God has assigned to men. Also, it mentions singing as part of the definition.

We women can fulfill part of the spirit of this prophecy, in one sense, through speaking encouraging words to others. As we read of the virtuous woman in Proverbs 31, “She opens her mouth with wisdom, and on her tongue is the law of kindness” (v. 26).

God adds more encouraging words through the prophet Malachi: “Then those who feared the Lord spoke to one another, and the Lord listened and heard them; so a book of remembrance was written before Him for those who fear the Lord and who meditate on His name. ‘They shall be Mine,’ says the Lord of hosts, ‘On the day that I make them My jewels. And I will spare them as a man spares his own son who serves him’” (Malachi 3:16–17).

A Different Role, Not a Lesser One

When God created Eve, he described her in Genesis 2:18 as a “helper” who would be suitable for her husband, Adam. The Hebrew word for “helper” in that verse is ezer. As the Church explains in its Personal Correspondence Department letter on the matter (L089):

This is not a demeaning label. God, seeing that Adam could not make it on his own, provided a partner for him who was equal in value and potential in the overall plan God had for mankind.

As the letter says, just because men and women are designed for different roles in life, “[in] the final analysis, God does not look at men or women differently.” It points out that although the Bible is clear and that women are not to become elders or preach sermons and are not to be ordained as ministers (1 Timothy 2:12), Paul allows for the ordination of deaconesses for service to God’s Church, and it highlights the example of Aquila and Priscilla—a husband and wife whom the Bible indicates were a deacon and deaconess—and how, together, they both helped the young teacher Apollo learn “the way of God more accurately” (Acts 18:26). They worked together as a team.

“Watching” Is for Women, Too!

Being a woman doesn’t mean we should not be aware of the world around us or examine it for insight.

In today’s world there are many very intelligent and prominent women who are very much engaged with the world around them. Queen Elizabeth II was featured recently in a documentary on the Smithsonian Channel. She is 90 years old and still “going strong” reigning over Britain and the Commonwealth. She has sat on the throne of David since age 26. Our booklet The United States and Great Britain in Prophecy explains more about this. It is quite inspiring to see her still functioning in her office. Duty and service are two main modes of operation that she strongly focuses on daily. We know we are to be rulers in God’s Kingdom, and it is most interesting to see her example.

A very intelligent female writer for the Wall Street Journal is Peggy Noonan. She frequently provides excellent insight into the situation of the world today. Her July 1, 2016 article, “A World in Crisis, and No Genius in Sight” was a good example. Ms. Noonan wrote that she was “thinking, again, of the concept of the genius cluster. They happen in history and no one knows why. It was a genius cluster that invented America. Somehow Franklin, Jefferson, Washington, Adams, Madison, Hamilton, Jay and Monroe came together in the same place at the same time and invented something new in the history of man… We could use a genius cluster.”

Like Ms. Noonan, women need to be aware of how world events are proceeding, as Christ commanded in Mark 13:35–37: “Watch therefore, for you do not know when the master of the house is coming—in the evening, at midnight, at the crowing of the rooster, or in the morning—lest, coming suddenly, he find you sleeping. And what I say to you, I say to all: Watch!”

I have talked with some women who believe that the Church is doing the watching for us, but Christ was speaking to us as individuals. Watching is part of working out our own salvation, and we, personally, need to be paying attention. The Church gives us a great deal of information about how world events are shaping up to fulfill prophecy, but unless we’re watching world news closely, the information may not seem relevant. We don’t want to find ourselves on the outside looking in, or to be like the Laodiceans in Revelation 3:20, where Christ was outside, saying, “Behold, I stand at the door and knock. If anyone hears my voice and opens the door, I will come in to him and dine with him, and he with Me.” They were evidently not paying attention—not  sitting at His feet, as it were—but were in a separate room or building.

Women Used in the Bible

There have been women prophetesses mentioned in the Bible, such as Huldah in 2 Kings 22:11–14, who was used by God to convey a message to Josiah, king of Judah, when he was shown to his horror that the forgotten Book of the Law was found in the temple and great wrath was coming on Judah because of their disobedience. Josiah actually sent to inquire of God’s words from her. 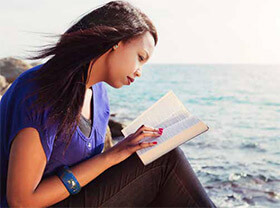 Scripture also mentions the prophetess Anna, who was present when Jesus Christ was brought to the Temple as an infant. She was a “widow of about eighty-four years, who did not depart from the temple, but served God with fastings and prayers night and day. And coming in that instant she gave thanks to the Lord, and spoke of Him to all those who looked for redemption in Jerusalem” (Luke 2:37).

Yet, it is not necessary for a woman to be a prophetess or deaconess to count as a noteworthy servant of God. I know there are many other women spoken of in Scripture who served God. It seems we read of more of them in the New Testament, such as Mary and Martha. We read of the remarkable example of Mary who anointed Christ’s feet with fragrant and costly oil and wiped them with her own hair (John 12:3-8). For this act, Jesus said, “Assuredly, I say to you, wherever this gospel is preached in the whole world, what this woman has done will also be told as a memorial to her” (Matthew 26:13).

Being a woman does not mean that God does not work with us—just that He may work with us differently in different roles and in different ways. Considering all of this, I take great hope that God will continue to work with all of us, despite our human frailties. We don’t practice sin, though we stumble on occasion, but we repent and “pick ourselves up” and continue on our walk, knowing that we have Christ as our Advocate. We practice righteousness, and the Apostle John said, “Little children, let no one deceive you. He who practices righteousness is righteous, just as He is righteous” (1 John 3:7).

So we can all have the hope that Peter spoke of when he was quoting the prophet Joel, “I will pour out my Spirit in those days; and they shall prophesy. I will show wonders in heaven above and signs in the earth beneath… Before the coming of the great and awesome day of the Lord. And it shall come to pass that whoever calls on the name of the Lord shall be saved” (Acts 2:18–21). Our roles may be different than those of men in the Church, but men and women, both, are a vital part of God’s plan for the world!