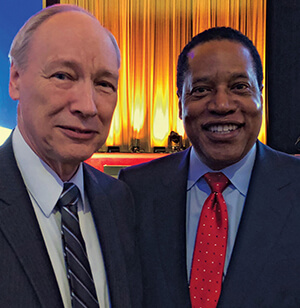 In late February and early March, several ministers from the Living Church of God attended the National Religious Broadcasters Convention (NRB). This non-denominational convention—bringing together several thousand broadcasters from all over the world— represents an opportunity to remain current on technology, equipment and best practices in the areas of television, radio and Internet broadcasting. Political and cultural topics that impact religious broadcast efforts are also discussed, including sessions featuring panels of experts from multiple disciplines and media types.

In the past, God has used these conventions to open doors for the Church to many new opportunities, such as broadcasting Tomorrow's World into new countries and in other languages, saving money on equipment and services, and providing contacts that further the Church's efforts in ways we would not have previously imagined.

The 2018 convention was held in Nashville, Tennessee, and Presiding Evangelist Gerald Weston, Mr. Wyatt Ciesielka and Mr. Wallace Smith attended. The NRB was considered significant enough to draw the attention of the White House, which sent Vice President Mike Pence to address the attendees in one of the sessions. And of particular interest to the Work was this year's focus on issues of censorship and the growing media bias against conservative and religious social values. One panel included popular media figures, such as commentator Larry Elder and popular radio host and author Dennis Prager. Mr. Prager, in particular, has been a victim of YouTube censorship for his intelligently made and culturally conservative videos, many of which the media platform has wrongly placed in the same restrictive category as violent and sexually explicit material.

Some of these sessions discussed the scope of the problem and presented strategies for overcoming biased and unfair restrictions. Since our own Tomorrow's World telecast is increasingly experiencing the growing force of this culture of censorship of anything resembling godly truth and values, the session was appreciated and very helpful. As panelist Tony Perkins of the Family Research Council pointed out to all attending, the efforts to silence voices that do not agree with our culture's current slide into moral degradation are growing in strength, and for those who seek to get out a message like ours, we are in a sprint, not a marathon! It was clear from what these speakers presented that this is no time to slow down or "take it easy."

In addition to the panels and presentations on new media technologies and broadcasting opportunities, Messrs. Weston, Ciesielka and Smith spent time at the NRB with many of our television representatives and vendors, discussing strategies and prospects for expanding and magnifying the impact of the Work.

What a privilege to be able to do God's Work in the world at such a time as ours! We are grateful for the opportunities presented at the NRB and look forward to applying the information gained there for the sake of the Gospel.