LCN Article What Parents and Youth Should Know About Vaping 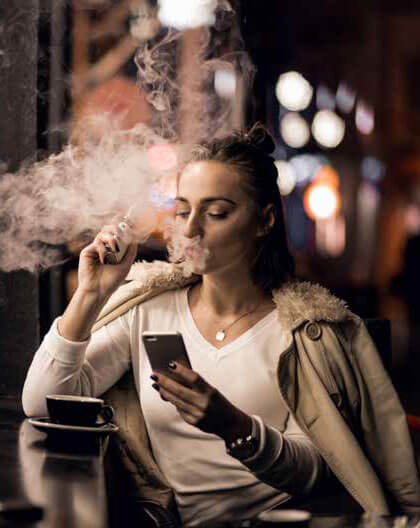 The use of e-cigarettes and vaping devices is becoming frighteningly common. Within the past two years, a specialized type of e-cigarette, in particular, has grown very popular: JUULs. Marketed by their creators, JUUL Labs, Inc., as “a safer alternative to adult smoking,” this power-packed, tastily-flavored vapor cigarette is likely creating the next generation of nicotine addicts. Using JUULs has even acquired its own name: “Juuling.” E-cigarettes, including JUULs, are electronic nicotine delivery systems (ENDS), and they have surpassed traditional cigarettes in terms of usage among U.S. teenagers. What do parents and teens need to know about the risks of Juuling and of e-cigarettes in general?

Unbeknownst to parents, many teens are flocking to this new, socially acceptable, and easily hidden vice, and are often misinformed regarding its dangers. Because there is no smoke from e-cigarettes—only scented/flavored water vapor and unscented chemicals—teens can smoke "e-cigs" without being caught. School bathrooms, hallways, and even classrooms are not unusual locations to find teens vaping. The CEO and president of the Truth Initiative recently observed, "It is no wonder that JUUL e-cigarettes have rapidly caught on with youth—they look like a sleek USB flash drive, are easily concealed, and come in youth appealing flavors like mint, mango and crème brûlée" (Tobacco Control, April 18, 2018).

While e-cigs bring very real dangers beyond their nicotine hit, what many users do not know is that one JUUL cartridge can contain the same amount of nicotine found in one to two entire packs of traditional cigarettes (Vox, August 22, 2018)! While some e-cigarette brands have nicotine-free options, all JUUL pods contain nicotine, according to the company's own website—something 63 percent of its users do not know. In fact, JUULs deliver nicotine to the bloodstream about twice as quickly as any other ENDS device does—creating the JUUL "buzz" known to their many users (Tobacco Control, April 18, 2018). Nicotine is well known for its addictive properties, and a recent University of Pittsburgh study found that e-cig users were four times more likely to start smoking traditional cigarettes than were those who do not vape (Truth Initiative, April 18, 2018).

The long-term impact of nicotine on the human body is well understood. Long-term nicotine use "is associated with cognitive decline and risk of Alzheimer's Disease" (National Institute of Drug Abuse, January 2018). Teenagers who use e-cigs have higher levels of cancer-causing chemicals in their blood than non-smokers have (Women's Health, May 4, 2018). According to Carol Southard, R.N., a tobacco treatment specialist at Northwestern Memorial Hospital, "Nicotine is extremely addictive and it can act as a neurotoxin and alter brain chemistry so the brain doesn't function normally without it. This can be especially harmful for teenagers whose brains are still developing." Although the research on e-cigarettes is limited due to the newness of these smoking devices, a recent study by the American Heart Association found that e-cigarettes will likely increase users' risks of heart disease and stroke, just like traditional cigarettes (Journal of the American Heart Association, July 18, 2018). 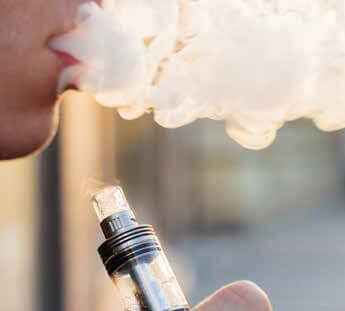 Yet, even when nicotine-free, using e-cigarettes may put users at risk for severe gum disease, "smoker's cough," weakened immune systems, and impaired wound healing (Science News for Students, April 25, 2017). Nicotine-free e-cigarettes (including the various flavored e-cigs) are still known to contain harmful chemicals that can lead to heart disease and stroke (American Heart Association, ATBV Journal Report, June 14, 2018). Numerous studies are now warning that even without nicotine, the flavoring liquids contained in e-cigs can be toxic and carcinogenic (cancer-causing) to the human body. Science News for Students reported in a March 30, 2018 article that the University of North Carolina School of Medicine at Chapel Hill studied 148 e-cigarette flavoring liquids and found that many were toxic to human cells. The same article, citing a March 2018 University of California, San Francisco study, found that teens who had vaped e-cigarettes without nicotine still "had up to three times the levels of five potentially cancer-causing chemicals in their bodies as did those who didn't vape." In fact, the U.S. Food and Drug Administration (FDA) is considering a ban on all flavored e-cigarettes because of an "epidemic of use" among teens and the addictive nature of the substance (BBC, September 12, 2018). Everyone needs to understand that when we put anything other than air into our lungs, we put ourselves at greater risk of sickness and disease! Many of the chemicals in e-cigarettes appear to be just as unhealthy, toxic, and carcinogenic to humans as those in regular cigarettes, if not more so!

There are plenty of known ways in which e-cigarettes damage the body, and more are likely yet to be found, but what does God think about their use? Can true Christians—whether adults or teens—somehow justify vaping? Is God really somehow "okay" with it? To answer these questions, we must consult God's word, the Bible.

A Christian Perspective on E-cigarettes

E-cigarettes may be legal for some to purchase and use, based on the age of the consumer and what state or country the individual lives in, but just because something is "legal" does not make it right in the sight of God (1 Corinthians 6:12)! More importantly, we are told, "Do you not know that your body is a temple of the Holy Spirit within you, which you have from God? You are not your own" (v. 19, Revised Standard Version). Considering all of the known health problems associated with e-cigarettes, a Christian cannot in good conscience use such a self-destructive device, and the Church's judgment concerning smoking applies just as directly to e-cigarettes and vaping.

Why do young people begin using e-cigarettes and Juuling in the first place? Peer pressure is certainly a key factor for some. In many cases, the underlying spirit of rebellion is also a motivating factor. This is why young people sneak to use JUULs in school bathrooms, classrooms, their bedrooms, and even at church! Secretly posting photos of personal use on social media like Snapchat or Instagram direct messaging, where it is easy to avoid parental and adult supervision, is also a clear effort to publicize covert rebellion. Deceitfulness is unbecoming for a Christian, and rebellion, as God says, "is as the sin of witchcraft" (1 Samuel 15:23). Young people face a lot of societal pressure today, and God is loving and forgiving, but it is simply not possible for anyone to truthfully claim that they are honoring their parents, or that they are setting a good example for others, when they are choosing to engage in something harmful to themselves. 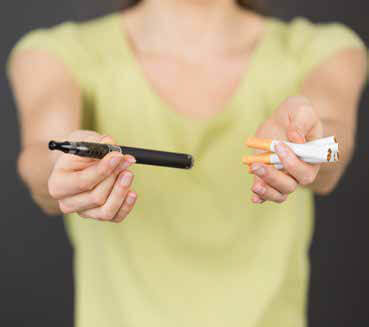 Some have defended the use of addictive substances or devices like e-cigarettes by comparing it to alcohol use (which God does allow in moderation). But this comparison is inaccurate. God condemns alcohol use when it results in drunkenness and addiction (1 Corinthians 6:10), but alcohol use in moderation (1 Timothy 5:23)—say, one or two drinks imbibed in one sitting by a legal adult—is not condemned in the Bible. Alcohol use by adults in moderation is not addictive, and even has health benefits in some cases. However, e-cigarette use—especially the use of devices with liquid nicotine—is addictive, and studies are showing that it increases the risks of many health problems. God notes in Revelation 21:8 and 22:15 that unrepented-of-sins will keep one out of His Kingdom. Among the unrepentant who are excluded are "sorcerers"—translated from the Greek terms pharmakeus or pharmakos referring to those who use drugs, potions, or narcotics in their "magic." Those who dabble "recreationally" with narcotics and hallucinogenic drugs—whether marijuana, the many methamphetamine and opiate derivatives, or nicotine and its chemically induced and addictive "buzz"—may be building their own barriers to entry into God's Kingdom.

Not only does vaping reflect poorly on us, it also reflects poorly on God, His way of life, and His Church. Furthermore, when young people know that their parents are against any of these dangerous habits, yet lie, hide, or deceive to cover these behaviors, they should prayerfully consider that they are violating many of the Ten Commandments. Young or old, none of us should put a substance or behavior before God (a violation of the First Commandment). All people should honor their parents (the Fifth Commandment), and no Christian should lie or deceive (a violation of the Ninth Commandment). Neither should a Christian covet (a violation of the Tenth Commandment). God is merciful, loving, and patient (Psalm 86:15)—and through Christ, we can have the strength to overcome all bad habits and sins (Philippians 4:13). But those who choose to engage in harmful practices quickly find themselves violating God's instruction.

We understand that we live in a world that is tremendously influenced by Satan the Devil (2 Corinthians 4:4). Satan is the father of lies (John 8:44) and his intent is to work "in the sons [and daughters] of disobedience" (Ephesians 2:2). One of his age-old lies is "a substance will not hurt you"—a trick he successfully played on Eve, all the way back in the Garden of Eden (Genesis 3:4–5). Christians of all ages must avoid practicing self-destructive and rebellious behaviors, like the use of e-cigarettes. God wants His people to be "above reproach" (Colossians 1:22) and "holy" before Him (1 Peter 1:16). He does not want us to pollute our bodies and minds with harmful substances.

Building character and living as Christians in Satan's world takes hard work and self-discipline. And today, young people are faced with more and more ungodly influences—many of which may seem marginal, or even harmless, but can nevertheless have horrible physical and spiritual consequences. But the blessings that come from making good and godly choices are numerous and long-lasting. God has called young people in the Church to be good examples now, and to eventually become members of His future spirit family! What an awesome calling and truth that we understand! To be in God's Kingdom, all of us, young or old, must "resist the devil" (James 4:7) and choose a godly path in life—the path that leads to eternal life! Parents and grandparents must also do their part—being fully involved in the lives of their children and grandchildren and assisting in the fight for their eternal lives. Sometimes this fight includes saying "no" to a small, seemingly innocuous, chemical-filled device like an e-cigarette.