As our Presiding Evangelist, Mr. Gerald Weston, has mentioned many times, God sent blessings upon His Church even during the height of the COVID-19 pandemic, propelling the Work forward while much of the world screeched to a halt. Those blessings included not only an increase in funds, but also an increase in labor made possible by the extra income! Since the beginning of 2020, the Living Church of God’s World Headquarters in Charlotte, North Carolina, has welcomed several new employees, who each bring fresh perspective and talents to the Work of God. We were delighted to have the opportunity to talk with seven of the newest Headquarters hires, and we thought you might like to learn a little about their experience working for God’s Church.

Having borne the responsibilities of Executive Administrative Assistant since March of 2021, Mr. Tyler Wayne brings greatly appreciated help to the Church Administration Department, especially when it comes to the Feast of Tabernacles. Of his two primary duties, the first involves assisting Mr. Rod McNair in managing the Festival Office—overseeing registration and assisting with Festival contracts and the Festival workflow schedule. He also maintains contact with Festival site coordinators to keep everyone on the same page. “When there’s a deadline, I kind of shepherd the process,” he said. “If it’s related to the Feast, I have a hand in it.” 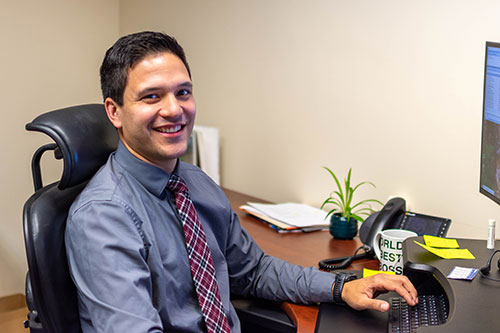 That’s no small task—but it’s not Mr. Wayne’s only duty. He also helps manage Tomorrow’s World Presentations. “I handle a lot of the scheduling for those presentations,” he said,” and I shepherd the processing of the documents involved. I handle some of the interface between the pastors and answer some of the questions that they have regarding the TWPs.” There is also data crunching to be done regarding these Presentations. “We track a bunch of the data for TWPs,” Mr. Wayne said, “trying to figure out what works and what doesn’t work, where we should have a TWP based on an area’s subscriber count, the last time we had a TWP there, the responses we normally get in that area, how they would relate to nearby congregations—things like that.”

“When I started, the goal of my position was to get things off Mr. DeSimone’s plate,” said Mr. Dalton Mooney, Digital Media Assistant for the Broadcast Media Department for the past two years. “I quickly became focused on ads.” A Living Education alumnus, Mr. Mooney works with Mrs. Rachel Keesee to create Tomorrow’s World ads that go on most of the social media where God’s Work has a presence. Together, they handle social media ads for North America, much of Europe, and various other nations. They’re also responsible for creating ads in French, Dutch, German, Spanish, and Afrikaans. “Another part of what I do is Google ads,” Mr. Mooney said. “So, when you search for something with Google and there’s an ad for Tomorrow’s World at the top, that’s also something we do.” Part of this involves search engine optimization—making sure that Tomorrow’s World material contains specific words or phrases that will make it easily located with common Internet search terms.

“I play with pretty colors all day,” joked Mr. Benjamin Graham, Graphic Designer for the 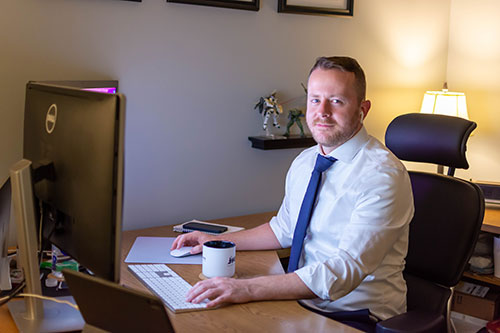 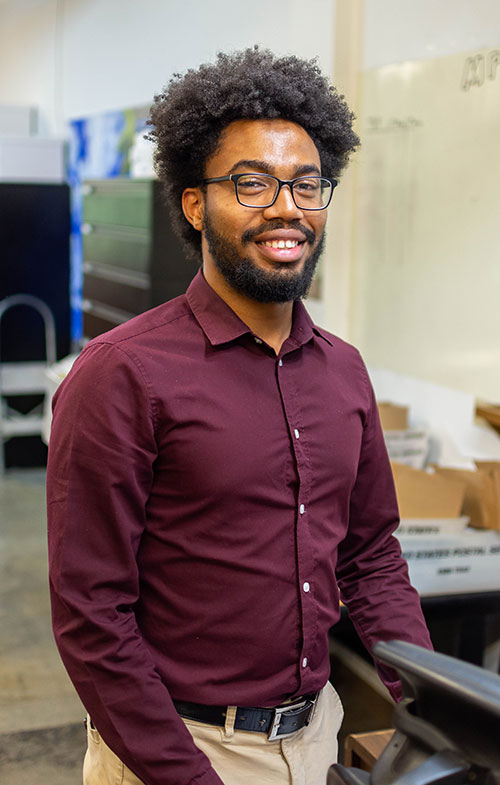 Mr. Nathan Morgan, Mail Clerk for the past two years, described the diverse tasks the Mail Processing Department accomplishes, such as mailing invitations for Tomorrow’s World Presentations, mailing coworker letters, and entering information in the Church’s ever-growing database. Also a Living Education alumnus, Mr. Morgan’s further duties involve helping to mail items that serve the needs of different congregations, such as Church publications for congregational libraries and information desks, supplies for the Passover and the Feast of Tabernacles, etc. “I like handling the mail processing machinery,” Mr. Morgan said. “There’s always something new to learn about it, learning how to fix this and fix that.”

Ms. Amanda Casey has served the Accounting Department since December of 2020 as its Senior Accountant, overseeing the processing of donations and accounts payable. In her words, this involves “making sure that the controls we’ve put in place over donation processing are working, that donations are being allocated to the correct accounts, and that they’re being tracked to the donor’s record.” This is done so that, at the end of the fiscal year, all donors receive accurate tax receipts and can therefore claim the appropriate deductions on their tax returns. 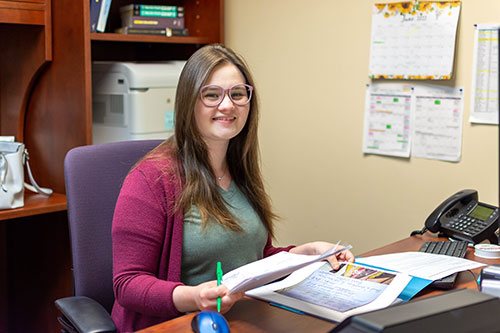 Working with Ms. Casey in the Accounting Department is Mrs. Rylyn Baca, Accounts Payable Clerk for the past year. A Living Education alumna, the bulk of Mrs. Baca’s duties involve invoice processing, which entails making sure that all invoices are labeled correctly and contain no misinformation of any kind. “The second-biggest part of what I do is helping to print checks,” she said, “and there’s a whole bunch of people involved in that process, because everything we do is double-checked.” 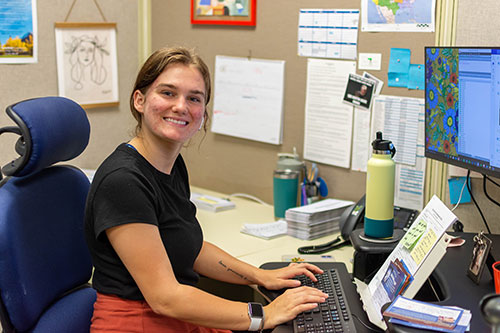 Ms. Meredith Hodges, Record Specialist, who has worked in the Records & Information Services Department for roughly a year, is another Living Education alumna with a background in customer service. Her duties involve keeping the Church’s database up to date so that we can better serve our members and subscribers. While she acknowledged that the work in RIS can seem a little mundane at first glance, she appreciates the upbeat, encouraging attitudes of her coworkers and supervisors—together, she said, they “make it fun.”

Mr. Wayne’s role in Church Administration provides a stark contrast to his previous work in the construction field. “I worked demolition before this,” he said, “and it’s an interesting contrast, to be in an office environment as opposed to being in a field environment. Working at HQ has been a really good experience.” Mr. Wayne has appreciated the opportunity to observe how the executives in God’s Church interact with business contacts in the world, and he tries to “soak up” as much as he can. “Church Administration interfaces with the world in a way that some departments don’t,” he said, “because we’re dealing with hotels, contracts, and things like that. So, when certain issues arise, it’s really interesting to see how Mr. Rod McNair handles it, or how other pastors handle it. It’s been a fun experience.”

“I worked with every kind of person under the sun when I worked at Qdoba,” said Mr. Mooney, who described the difficulties of working where he heard perverse language on a nearly constant basis—a sharp contrast to working with the people of God. He remarked positively on the efficiency and camaraderie of Headquarters, describing it as “a high-functioning office space with a lot of moving parts. We have a very close-knit group over here. Everyone knows everyone and everyone gets along.” Of course, there are other perks to leaving the food service industry. “I also haven’t burned my fingers on anything—that’s been pretty nice,” he said, smiling. “Less free food, though.”

Mr. Graham previously worked in the corporate world and spent six years designing and gathering data for a bank. When asked how the Headquarters environment differed from that of his prior positions, he mused that “they’re definitely two different worlds. I think with more of a corporate environment there are way more processes, way more boxes to check off. It’s a lot of people, a lot of gears in the machine. Contrast that with working at Headquarters—I’d say we are a much smaller shop, much more bare-bones, but I think a huge advantage to that is a freedom to explore.” Mr. Graham related how his previous employment often involved spending multiple months on a single design project. Working at Headquarters offers him an enjoyable change of pace, with multiple projects to which he can apply himself creatively. “Being a designer, working for smaller companies is always preferable by its very nature,” he said. “You want to be able to work on a bunch of different things. If I’m working on a website for a while, it’s nice to switch gears and design a magazine cover. I’m really happy I’m able to do that.”

Mr. Morgan’s prior job experience prepared him for his current role in unexpected ways. “I worked at H&M, a clothing store,” he said, “with a lot of warehouse duties like stocking, taking inventory, folding, putting things away, and organizing, which is kind of what we do in MPD—there are different sections for different booklets, and you sleeve things away, put them into envelopes.” Mr. Morgan also worked at an accounting firm, which he says prepared him for the email correspondence he now finds himself maintaining. “I like to think that sending emails in my accounting job kind of prepared me, in a way, to try to send emails nicely when I send them in MPD—make sure they are worded correctly, make sure I’m communicating what I’m saying properly so the other person understands,” he said.

Ms. Casey, who previously worked in the audit department of the public accounting firm Eide Bailly, described the work environment at Headquarters as one of both diligence and understanding. “We work really hard to get done what needs to be done, and there’s always more to work on—but, for example, I’m studying to become a Certified Public Accountant, and last week I had one of my tests, and I had time to take that, which was really great. So, it’s nice to have that little bit of flexibility there, and everybody’s very understanding and willing to work together.” Ms. Hodges concurred, saying that “having cheerful and lighthearted people to work with makes the repetitive nature of the job feel much more exciting and fun, as well as having a purpose to what I’m doing and knowing it’s benefiting God’s Work.”

Reflecting on the job she held in food service before being employed by the Church, Mrs. Baca joked that, “here, I have a lot less people coming up to me and asking if our ice cream machine is working.” On a more serious note, Mrs. Baca related that when she began working at Headquarters, she became part of “a well-oiled machine,” very unlike where she’d worked before, where “employees would disappear for a while or take as long as they possibly could to do something. The mentality of making the job easier for the next person was not there. The biggest help to my mindset is knowing that I want to make sure I’m making the next person’s job easier.”

As God’s Work continues to move forward, we are deeply thankful that He has blessed Headquarters with diligent employees young and old. Anyone who has been to Headquarters knows that God does a truly miraculous amount through what is, by all accounts, a very small team. While we are thrilled to welcome and work with new members of that team, the best part is always knowing that God gets His Work done by His power, and that the entire team includes all of His people around the world, each contributing his or her prayers, good example, and resources as they are able. God chooses whom He calls and works through, and supports all of us through His Spirit, training us for responsibilities in the future that we cannot now imagine.

Of course, these are not the only new employees God’s Church has been blessed with recently—we hope to introduce you to others in a future issue of the Living Church News, and we hope that many more will have this small foretaste of the work environment God will soon bring to all the world. “The nature of the relationship is inherently different,” Mr. Graham added, “because you’re working with God’s people. In the corporate environment, there were still some great times and there were people I loved to work with, but to work with God’s people and not have to worry about being confronted over the Holy Days, the Sabbath, or things of that nature—I don’t think you can put a price on that.”