Following the hurricane on the East Coast that caused the cancellation at Hilton Head’s Feast site, meteorologists were predicting the “storm of the century” on the other side of the country, as the tail end of a powerful typhoon was scheduled to hit the Pacific Northwest. As many brethren were traveling to Seaside for the Feast, hurricane-level winds and resulting widespread power outages were forecast for the weekly Sabbath of October 15.

As we prepared for those Sabbath services, with flashlights and lanterns handy, Dr. Jeffrey Fall gave a sermon ironically titled “Light in the Darkness.” Even though power outages were predicted, services continued as scheduled and were broadcast over the Internet to the Pacific Northwest congregations with only a flicker of the lights (which seemed to dramatize the point he was making). The lights stayed on and continued to stay on for the entire Feast! 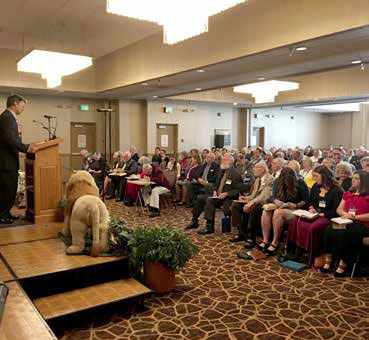 As local station KOMO reported, “What was computed—even as of Saturday morning—to rank among the region’s greats ended up woefully under developing. What was supposed to be a lion turned out to be something more along the lines of a lizard with maybe a bit of an attitude… [A]s the storm reached the spot to develop as predicted, it started strengthening. And then, something strange happened, it didn’t go as strong as forecast—ending up much weaker than even the most pessimistic forecast model had predicted.”

While meteorologists were puzzled, saying that they would be pouring over the question of what went wrong with their forecasts “for quite some time,” all of us knew “what went wrong” and were energized and thankful for God’s merciful intervention.

Testimonials from Feast Families at Seaside:

“We were at the Best Western the Friday before the Feast. We got a call from the front desk giving us the warning to be prepared for high winds. The hotel general manager informed us that the local sirens had gone off, warning the locals of 100 mile per hour winds. We were advised to stay away from windows and glass. The wind picked up, but the ominous storm never came!”

“On the Tuesday before the Feast, two of our families were traveling together. After experiencing the Giant Redwoods, we stopped for the night at a hotel in Crescent City, California. When checking in, the hotel manager asked where we were headed... Upon telling him we were going to Seaside, Oregon, he immediately became very concerned, and suggested that we change our plans. He proceeded to tell us that there was a major storm due to hit the Oregon coast, with forecasted high winds of 100 mph plus, as well as very high waves. He said it was unknown as to the damage it could bring, again suggesting we wait it out before proceeding. We thanked him, but continued to the Feast the next morning.’

“In speaking to one of the friendly staff members at the Best Western Resort in Seaside, I commented that, while we were prepared for electrical outages, we were pleasantly surprised to not have the storm fulfill all the expectations for the area! She animatedly commented that they were very appreciative also, and that this ‘storm of the century’ was scheduled to come directly to Seaside. Interestingly, she further said that as this major storm headed directly toward Seaside, it suddenly split into two fronts of near-tornado type winds, hitting 12 miles north and 12 miles south of Seaside! She was amazed—as was I, but I instantly felt very blessed and protected by our Great God!”

Storm of the Century, or Collective Sigh of Relief?

The following was the experience of one Church of God couple as they drove into a potentially dangerous storm, only to arrive safe and sound at the Seaside Feast site:

As we were traveling by car to the Feast site in Seaside, Oregon this year, we kept a close eye on what was being called “the storm of the century” that loomed just off the Pacific coastline of California, Oregon and Washington. On Thursday, October 13, we started encountering the early rain and wind bands from the storm as we explored the California countryside on U.S. Highway 101. We had alternating weather from rainy and windy to just cloudy throughout the day, but as night fell we ran into more severe conditions. We concluded our daily trek earlier than we had planned because of the increasing gusts and downfalls, along with debris that was being ripped from the towering redwoods.

Reasoning that the storm would be less intense farther inland, we re-routed our course along Interstate 5. The plan was a success for a while, but—again—we started experiencing the powerful energy that the storm was exhibiting in its advance to land. One band that we survived in the Salem area brought such a torrent of rain, accompanied by an unyielding wall of wind, that traffic was forced to slow to a safer speed in an effort to handle the raging conditions. With sheets of water spraying from vehicles, veritable buckets of rain falling from the storm clouds and blasts of hurricane-force wind, we could feel our vehicle fighting to hold traction on the highway. The trip that we felt would be an easy jaunt became an extended challenge.

After reaching Portland later than we had previously planned, we regrouped and turned our attention toward Seaside, knowing that surely more of the same was in store. As we travelled along Oregon Highway 26 toward our destination, however, conditions improved. Rain and wind continued, but not the ferocious nature that we had seen. We arrived in Seaside to just a gentle ocean breeze and a misty drizzle, and we thanked God for an all-the-more tremendous Feast experience.