LCN Article "We will one day be the builders"

The Feast in Haiti was an opportunity to witness—in advance—the destruction and hardship that all humanity will face before the return of Jesus Christ. The brethren in Haiti understand this more than most. For example, in 2010, the brethren were protected from one of the most destructive earthquakes in history. On the Sabbath following the earthquake, all the brethren showed up for services with thanksgiving and a positive attitude.

Right before the Feast of Trumpets this year, their faith was tested again as Hurricane Matthew approached the island, heading toward the western part of the country where most of the brethren live, where Sabbath services are held, and where one of the two 2016 Feast sites in Haiti was located. I cancelled Holy Day services to make sure no one was traveling throughout the early afternoon and evening. That evening, the hurricane turned towards the rural southern part of the country. The brethren there had planned to travel to the western part of the country to keep the Feast with those brethren—however, no one could keep the Feast at that site as planned: the main bridge leading to the Feast venue was completely destroyed, and the facility itself was also damaged by the extensive flooding. The search fora new Feast site began immediately. 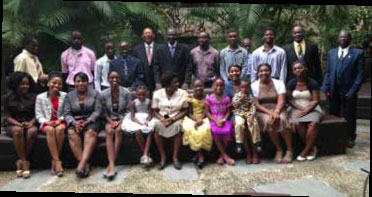 Again, the brethren remained positive and determined to have the best Feast ever. God blessed them and put His name on a brand-new resort hotel in the western part, where the brethren enjoyed a physical Feast of all-inclusive food and beverage for the entire eight days of the Feast. The rebuilding of all nations under the rule of Jesus Christ became the theme of the 2016 Feast of Tabernacles in Haiti, and we were able to understand more fully the true meaning of this aspect of our future responsibilities.

It was just two days before the Feast that I was able to reach the brethren in the southern part of the country. The local elder and one of the deacons traveled with me through the mountains and flooding. I had not been able to contact any of the brethren there but when the three of us arrived, we found that no one had been hurt. However, several brethren had lost all of their property. They will relocate and rebuild in other areas.

For these brethren to keep the Feast, we were able to use a facility they have used in the past, in an area where there was no damage. Keeping the Feast in this area of Haiti is a reminder of how the Feast was kept during the early years of the Church, when the brethren camped out in temporary dwellings. I was also able to assist brethren who needed help to keep the Feast. All Feast activities continued as planned. Under the most difficult circumstances, the brethren still organized the choir, talent show, arts and crafts for the children, and family dance right under the stars. Despite what was going on around them, the brethren remained positive, and encouraged and helped one another to enjoy the Feast.

As I had approached the devastated area of the southern tip of the country before the Feast, I wondered what I could say to encourage the brethren. But instead, they encouraged me, with their ability to endure, their humility, and their attitude of looking forward to Tomorrow’s World, no matter how difficult it may be right now in this present age. As one of the brethren put it, “We must endure hardship, because God has a greater plan for the rebuilding of this nation, and we will one day be the builders. What a great task just ahead.”