LCN Article The Wheat and the Chaff

“For the Lord Himself will descend from heaven with a shout, with the voice of an archangel, and with the trumpet of God. And the dead in Christ will rise first. Then we who are alive and remain shall be caught up together with them in the clouds to meet the Lord in the air. And thus we shall always be with the Lord. Therefore comfort one another with these words.”

Who in God’s Church hasn’t imagined what that thunderous shout might be like, and how exciting it will be to know that the fulfillment of the ancient promise of the Feast of Trumpets is finally come? Then imagine being transformed “in the twinkling of an eye” (1 Corinthians 15:52), utterly separated from the world of corruption, and brought into the glory of God’s immortal Family!

There is a recurring theme in the Bible of God’s separating out the good fruits from the bad, and our Father has both the will and ability to do just that. The annual Holy Days and their timing within the harvest cycle of ancient Israel work together to picture elements in the plan of salvation, and it is good to remember this great harvest theme during this season of the year. Let’s look at some examples.

When wheat or barley grows, a long stalk supports a “head” that consists of nutritious grains or seeds surrounded by inedible husk. In the threshing process, wheat grains are removed from the husk and stalk on a threshing floor. The sheaves of grain are beaten out either by hand or by the action of a sled pulled by an animal. This was an essential part of the harvest in ancient times and is still done in some parts of the world today. The result of threshing is a mixture of wheat grains and ground bits of the inedible material called chaff. This mixture of wheat grains and chaff is then tossed into moving air—either from a breeze or a fan—and the chaff, being lighter, is blown away while the heavier wheat grains fall back into the worker’s pan to be kept. The process of separating the wheat grains from the chaff is called winnowing.

In describing what Jesus will do at His return, John the Baptist proclaimed, “His winnowing fan is in His hand, and He will thoroughly clean out His threshing floor, and gather the wheat into His barn; but the chaff He will burn with unquenchable fire” (Luke 3:17). Clearly, the long-term prospects for the “spiritual chaff” are not very good.

It’s important to remember that the good and bad often grow in close proximity to each other. Referring to the Father, Jesus said, “He makes His sun rise on the evil and on the good, and sends rain on the just and on the unjust” (Matthew 5:45). In this age, the unrighteous often prosper more than the children of God living among them, but the time will come—pictured by the Feast of Trumpets—when God will separate out those who are His good fruits.

The kingdom of heaven is like a man who sowed good seed in his field; but while men slept, his enemy came and sowed tares among the wheat and went his way. But when the grain had sprouted and produced a crop, then the tares also appeared. So the servants of the owner came and said to him, “Sir, did you not sow good seed in your field? How then does it have tares?” He said to them, “An enemy has done this.” The servants said to him, “Do you want us then to go and gather them up?” But he said, “No, lest while you gather up the tares you also uproot the wheat with them. Let both grow together until the harvest, and at the time of harvest I will say to the reapers, ‘First gather together the tares and bind them in bundles to burn them, but gather the wheat into my barn’” (Matthew 13:24–30).

At the spiritual harvest, when God’s begotten children enter His Kingdom, there is a separation involved.

The Threshing Floor of Ornan

Let’s look at another example. Did you know that the Temple Mount in Jerusalem, the location of Solomon’s Temple, is the site of an ancient threshing floor?

Then David said to Ornan, “Grant me the place of this threshing floor, that I may build an altar on it to the Lord. You shall grant it to me at the full price, that the plague may be withdrawn from the people.”… So David gave Ornan six hundred shekels of gold by weight for the place (1 Chronicles 21:22, 25).

Now Solomon began to build the house of the Lord at Jerusalem on Mount Moriah, where the Lord had appeared to his father David, at the place that David had prepared on the threshing floor of Ornan the Jebusite (2 Chronicles 3:1).

At this point, it’s helpful to know a little geography. The threshing floor of Ornan was located a few hundred yards north of the small, walled city that was Jerusalem in the days of King David. The Dome of the Rock mosque is located in that area today. Both the threshing floor and the city occupied part of a low mountain, Mount Moriah or Zion. Located about 1,000 yards east is the Mount of Olives. Between the two mountains is the Kidron Valley, which was also known in ancient times as the Valley of Jehoshaphat. About 55 miles to the north, Mount Megiddo (Har Megiddo or “Armageddon”) overlooks the broad Valley of Jezreel (or Plain of Esdraelon).

Sometimes you may hear people refer to “The Battle of Armageddon,” but the Bible mentions that location—Har Megiddo—as the place where armies gather before marching on Jerusalem. It is at Jerusalem that the terrible battle takes place, in the Valley of Jehoshaphat, a name that means “the Eternal judges.” “For they are spirits of demons, performing signs, which go out to the kings of the earth and of the whole world, to gather them to the battle of that great day of God Almighty.… And they gathered them together to the place called in Hebrew, Armageddon” (Revelation 16:14, 16).

The Bible Tells the Story

Prophecy foretells the events of “the Battle of that Great Day of God Almighty” in vivid detail. Consider these passages:

I will also gather all nations, and bring them down to the Valley of Jehoshaphat [modern Kidron Valley]; and I will enter into judgment with them there on account of My people, My heritage Israel, whom they have scattered among the nations; they have also divided up My land (Joel 3:2).

For I will gather all the nations to battle against Jerusalem; the city shall be taken, the houses rifled, and the women ravished. Half of the city shall go into captivity, but the remnant of the people shall not be cut off from the city. Then the Lord will go forth and fight against those nations, as He fights in the day of battle. And in that day His feet will stand on the Mount of Olives, which faces Jerusalem on the east (Zechariah 14:2–4).

“Let the nations be wakened, and come up to the Valley of Jehoshaphat; for there I will sit to judge all the surrounding nations. Put in the sickle, for the harvest is ripe. Come, go down; for the winepress is full, the vats overflow—for their wickedness is great.” Multitudes, multitudes in the valley of decision!... The sun and moon will grow dark, and the stars will diminish their brightness. The Lord also will roar from Zion, and utter His voice from Jerusalem; the heavens and earth will shake; but the Lord will be a shelter for His people, and the strength of the children of Israel. “So you shall know that I am the Lord your God, dwelling in Zion My holy mountain. Then Jerusalem shall be holy, and no aliens shall ever pass through her again” (Joel 3:12–17).

Through the prophet Daniel, God describes this moment in history as a removal of chaff:

You watched while a stone was cut out without hands, which struck the image on its feet of iron and clay, and broke them in pieces. Then the iron, the clay, the bronze, the silver, and the gold were crushed together, and became like chaff from the summer threshing floors; the wind carried them away so that no trace of them was found. And the stone that struck the image became a great mountain and filled the whole earth (Daniel 2:34–35).

That great mountain that grew to fill the earth is the Kingdom of God. The same Jesus who once came as a meek Lamb is coming back as a mighty warrior—as one who “fights in the day of battle”—to rule “with a rod of iron” (Revelation 2:27; 12:5; 19:15).

Apparently, the location of the threshing floor of Ornan will also be the scene of the greatest separation of wheat from chaff in history.

God says that we are to be patient while He works out His purpose in this age, but sometimes His children can become discouraged because they have manifold trials while the dishonest seem to prosper. During the long wait between the spring and fall Holy Day seasons, it’s good to remember that while the world loves its own, God loves His own much more. He has a desire for the work of His hands (Job 14:15) and will surely perform what He has said, separating the wheat from the chaff by making His children immortal. Our job is to be His faithful, fruitful, obedient servants until our Lord comes. He left us some good advice:

Now learn this parable from the fig tree: When its branch has already become tender and puts forth leaves, you know that summer is near. So you also, when you see all these things, know that it is near—at the doors! Assuredly, I say to you, this generation will by no means pass away till all these things take place…. Watch therefore, for you do not know what hour your Lord is coming…. Therefore you also be ready, for the Son of Man is coming at an hour you do not expect” (Matthew 24:32–34, 42, 44).

Then He repeated His ancient promise!

When the Son of Man comes in His glory, and all the holy angels with Him, then He will sit on the throne of His glory. All the nations will be gathered before Him, and He will separate them one from another, as a shepherd divides his sheep from the goats. And He will set the sheep on His right hand, but the goats on the left. Then the King will say to those on His right hand, “Come, you blessed of My Father, inherit the kingdom prepared for you from the foundation of the world” (Matthew 25:31–34).

All of us should ponder this great promise and come to appreciate it all the more as the Feast of Trumpets approaches. 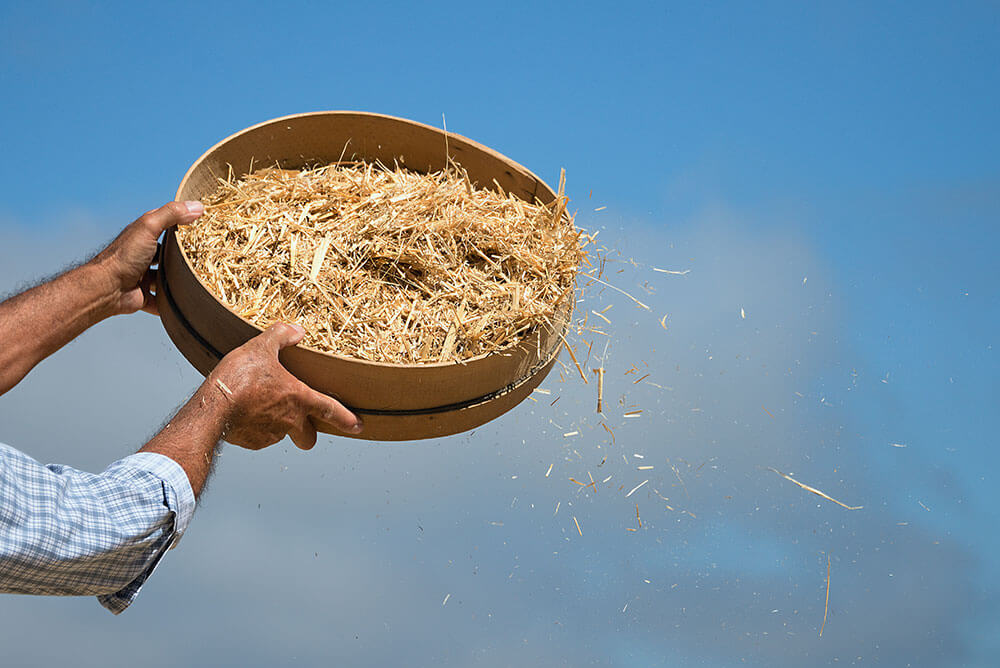